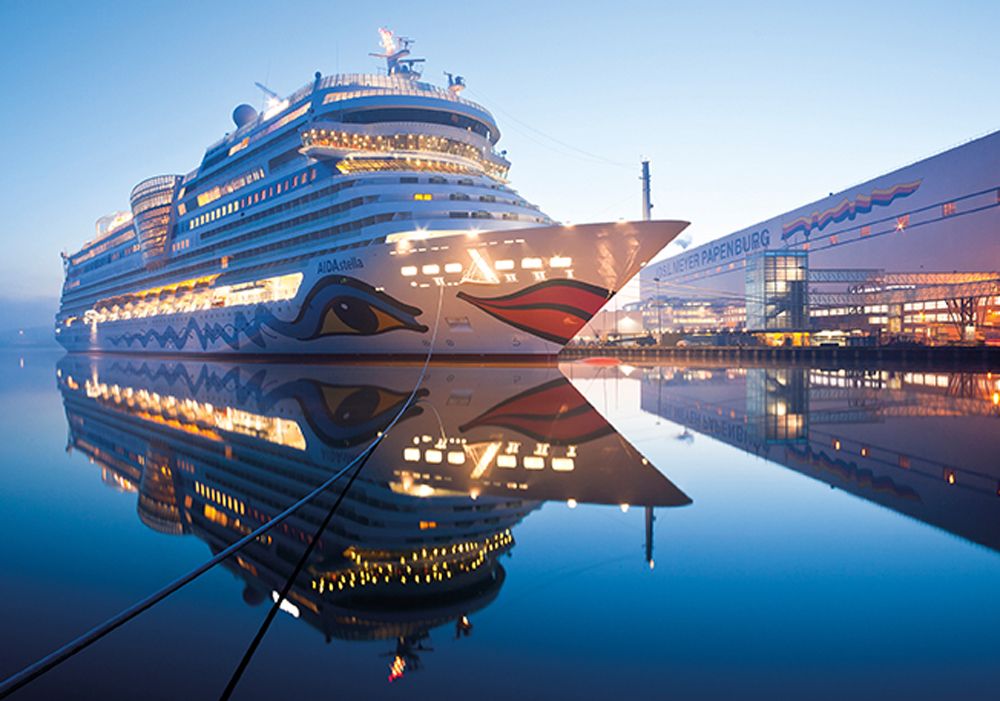 Cruise ships provide space for around 4000 passengers, offering the utmost comfort for enjoyable voyages. An air conditioning system that circulates several million cubic metres an hour guarantees a constant indoor atmosphere despite very diverse outdoor temperatures. One problem here lies in the numerous doors connecting the outside area to the inside of the ship. Every time these open there is an exchange between the air masses inside and outside. The expensively conditioned air inside escapes, while humid, sultry tropical air flows in. The Papenburger Meyer shipyard solved the problem by building a new ship with air curtain systems from Teddington.

The Meyer shipyard, a traditional family business, has been building ships in Papenburg for more than 200 years. Over recent decades, the Meyer shipyard has built up an excellent reputation for building special ships. Car and passenger ferries and RoRo ships have been built in Papenburg for decades, but the company is primarily known for building large, modern and sophisticated cruise ships.

COMFORT RIGHT FROM THE START

A client wanted its newly constructed ship to have all external doors fitted either with a windbreak or, where that was not possible, with air curtains. For reasons of space, a total of 21 air curtain systems were needed on 18 doors. As the Meyer shipyard had already had good experiences using air curtain systems from Teddington in 2010 and 2012, the planning team contacted the company and asked for a quote. Former orders, which involved screening the storage rooms and cold stores, were completed to the complete satisfaction of all concerned./p>

The air curtain specialist devised various alternative quotes for the new project which were then discussed on site with architects and ventilation experts from the shipyard.
Since no air curtain systems had previously been installed in the passenger area, special importance was attached to the architectural specifications.

Gerrit Lehmann, project managing engineer for ventilation at the Meyer shipyard, explains the decision-making process: “The decision, which was also taken in close coordination with the shipping company, was to install units from the A-series with tried and tested lamella technology where there was sufficient installation height above the doors. We planned air curtain systems installed at the side for doors without sufficient space for installation in the ceiling. Air curtains from the E-series with nozzle technology lent themselves to this situation. Then we ordered all units in a specific colour that matches our architectural specifications. A special solution was required for the ceiling-mounted devices to ensure that subsequent access after closing the ceiling would not be a problem.”

The E-series with nozzle technology requires up to 80 % less energy than traditional systems with conventional air conveyance to produce the same screening performance. With the patented system, the air flow is compressed in the pressure chamber and distributed evenly by the nozzle across the entire air discharge width. The air flow is accelerated by the concave sides of the nozzles in such a way that a concentrated, low induction curtain develops that is directed against the outdoor air. Much less air and therefore less energy is needed to generate the same effect as a conventional system.

SATISFACTION OF EVERYBODY CONCERNED

The shipyard installed and adjusted the units – and they worked perfectly. With good communication and punctual delivery, the cooperation was very positive from the shipyard’s perspective. The shipping company is likewise satisfied with the result and is currently considering retrofitting air curtain systems to a number of other areas.