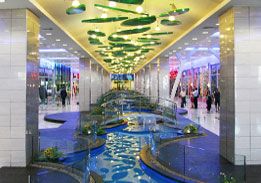 TEDDINGTON SCREENS ONE OF THE BIGGEST SHOPPING MALLS

While the famous Grand Canyon natural monument has been work in progress for 65 million years, the “Grand Canyon” in Saint Petersburg was erected in a short time and opened in 2006. We are talking here about one of the biggest shopping malls in the Russian Federation. The open design inside provides generous space for visitors, but was also characterised by draughts and cold temperatures during the Russian winter.

With a population of more than 4.8 million, Saint Petersburg is the second largest city in the Russian Federation after Moscow and is one of the biggest cities in Europe. The most northerly city in the world with over a million inhabitants is a centre for culture and research and development, and an outstanding business location and traffic hub. It presents modern Russia, also in the form of numerous shopping centres.

One of the biggest shopping malls is the “Grand Canyon”. It has a total area of 200,000 square metres, parking for 2,100 vehicles and 75,000 square metres of sales space. 140 shops, various companies with offices and seven restaurants attract around 1.5 million visitors each year. In addition to the wide range of merchandise available, there is an event ice-skating rink, a cinema park with space for more than 2,000 visitors and a town for children called “Kidsburg”. This offers a complete world of play for children, with art school, language schools, post office, bank and police station, and their parents are able to shop in peace while they are there.

Unpleasant draughts and cold temperatures – above all during the hard, Russian winter – repeatedly disturbed the well thought out building complex. Several large doors and an open design inside promoted the exchange of large volumes of air and substantially impaired the shopping experience. The operators of the shopping mall had, however, planned all entrances as windbreaks with automatic sliding doors, and had installed overdoor heaters on internal doors to guarantee a pleasant indoor atmosphere. Subsequently fitting further equipment to external doors was also not adequate. In winter, some of the less important doors were even kept locked to alleviate incoming wind. Various brands and models of ventilation systems were tested, but no satisfactory solution was found.

The company that operates the “Grand Canyon” therefore contacted OOO <>, who are Teddington air curtain systems’ Russian distribution partner. A panel of experts met in Saint Petersburg in the summer of 2011 to survey the situation. Even at this time of year, substantial wind load could be felt at the entrances, leading to discomfort in the building. A solution was found. The choice made was to install devices from the E-series – one of the most efficient air curtain systems for the Shop & Business area.

With the nozzle technology used in the E-series and a sophisticated arrangement of units, the specialists found a customised solution. The E-series with nozzle system requires up to 40 % less energy than systems with conventional air conveyance to produce the same screening performance. With the patented pressure chamber nozzle system, the air flow is compressed in the pressure chamber and distributed evenly by the nozzle across the entire air discharge width. The air flow is accelerated by the sides of the nozzles in such a way that a concentrated curtain develops that is directed against the outdoor air. Much less air and less energy is needed to generate the same effect as a conventional system.

On the doors inside the wind break the units were arranged horizontally above the doors with the air discharge opening facing downwards. This is technically the best solution. Whereas the discharge range of devices from other suppliers in earlier tests was too low, it was seen that the devices in the E-series were able to screen the entire door opening. Where horizontal installation was not possible for structural reasons (as was the case with external doors), the devices were installed vertically next to the doors. This type of installation usually requires two units to be installed, which are then erected to the left and right of the doors. Here too, Teddington has found a way of managing with just one unit per door. The arrangement was designed such that one devices discharges air into the air intake of the other. In this way it was possible to reduce any air turbulence to a minimum, while on the other hand increasing the screening effect.

The inside and outside of important entrances were fitted with nozzle technology. As a result, the windbreak is always kept at a pleasant temperature. The old overdoor heaters were only kept on the emergency doors which are away from visitor traffic.

Thermostats have been installed in the windbreaks, and are integrated into the automatic control system. The units themselves are switched in a master/slave arrangement. Irrespective of which doors (internal or external) open first, both units switch on simultaneously. This ensures that the windbreak also lives up to its name. The entire system therefore starts operating immediately when the doors are opened.

SATISFACTION AT ALL LEVELS

In conclusion, the new concept demonstrates that a comfortable temperature is reached in the building and that unpleasant draughts no longer occur. There is moreover a very positive energy situation, with big energy savings compared to the equipment previously used. Tenants and visitors are equally satisfied. Following this positive experience, the operating company believes that further properties will be fitted with devices from Teddington in the future.