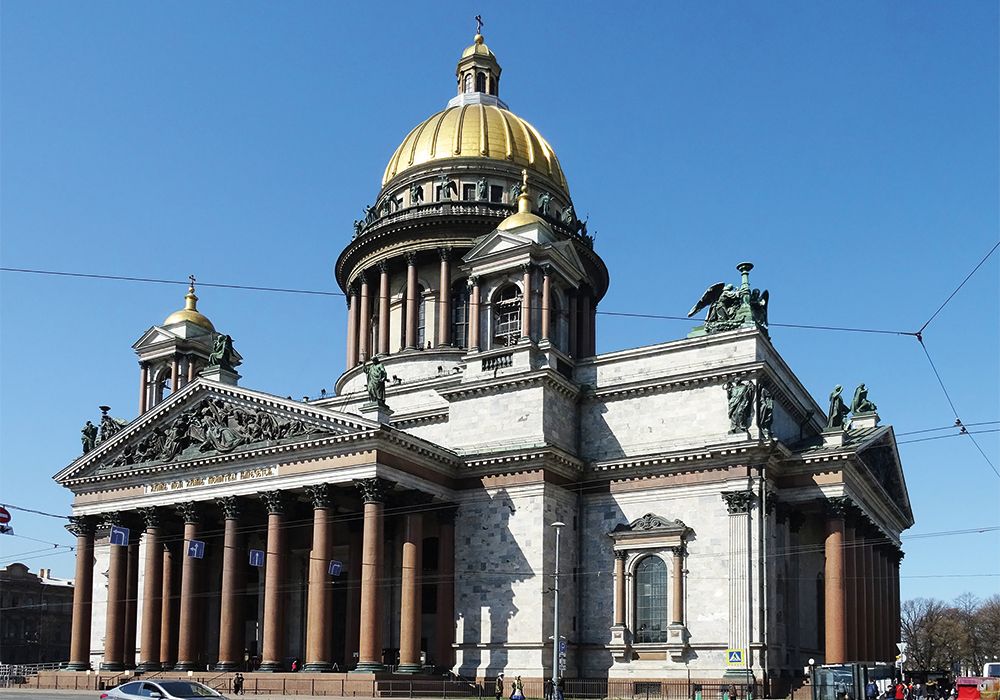 Saint Isaac’s Cathedral in Saint Petersburg, one of the largest sacred domes in the world, provides space for over 10,000 visitors. Some three million people visit the monument each year, a constant coming and going. Following a long approval procedure, two air curtain systems from Teddington have been screening the entrance and exit areas from draughts and lost energy since the winter of 2015/2016.

St. Isaacs’s Cathedral, which lies in the centre of the historical part of Saint Petersburg, is equally popular with tourists and residents thanks to its cultural significance and the gigantic proportions of the building. With a diameter of 26 metres, the gilded main dome shines on a sacred building which in total encompasses over 20,000 cubic metres of space. The cathedral has room for more than 10,000 people at the same time, and with over three million visitors each year, the entrances and exits to the historic building are frequented considerably more than in many a modern department store.

On many days of the year, the two entrances and exits are in nonstop use by visitors. In the past this led to massive ventilation problems. High wind loads impact on the broad northern façade of the cathedral, initiating a powerful draught when both doors are open simultaneously. This is not just unpleasant for visitors, but also sends heating costs sky high. Glass sliding door constructions designed to act as a windbreak and placed in front of the historical entrances and exits as well as overdoor heaters installed above the external doors proved to be unsuitable for maintaining a stable indoor temperature.

In 2011 the company GMP, which is entrusted with the facility management of the property, therefore approached Comfort Trade who are Teddington’s distribution partner in Saint Petersburg. Experts from Comfort Trade and Teddington then jointly surveyed the critical ventilation situation in the historic building. They proposed an individual solution that is specifically tailored to the features of the listed building to Gennadij Polunin, the chief engineer at GMP responsible for St. Isaac’s Cathedral.

As the doors are over four metres high and anchor points in the historical ceilings and walls were not wanted, a horizontal air curtain installed beneath the ceiling did not come into question in this case. Instead, Teddington developed a concept whereby the E-Series with the CONVERGO® pressure chamber nozzle system could be mounted vertically.

In a special design method, units with the maximum available length of three metres were each to be combined with a further unit positioned “on top”, so covering the entire height. The idea behind this is that the area further down where visitors are moving around is heated, while the warm air circulating above is prevented from escaping. This solution is characterised by extremely high energy efficiency, because only the bottom area which is key to the comfort of the numerous cathedral visitors is heated. Despite the extreme outdoor temperatures of the Russian winter (up to minus 25 degrees), heating costs in the St. Isaac’s Cathedral can be greatly reduced in this manner. There is also a huge drop in the energy required by the air curtains.

Presented in 2011, the air curtain systems were finally approved in 2015. This was preceded by intensive consultations with the local authorities responsible for monuments to ensure that the technology would fit well into the general appearance even though holes needed to be drilled into the historical floor for heat supply.

To protect the valuable historical wooden doors against cracks caused by fluctuating temperatures, special thermostats and control systems were integrated into the overall solution. These maintain a stable temperature and have been connected via the Teddington TLC 700 electronic controller to the building management system.

Since the winter of 2015/2016, the Teddington air curtain systems have been protecting the inside of the building from draughts and the cold. They proved to be extremely effective during their first Russian winter. Gennadij Polunin: “The entrances and exits are now finally protected from wind and weather. The desired screening effect and the comfort assured by Teddington has materialised to our complete satisfaction. A further important point is that we are now saving a great deal of energy and reducing our operating costs.”;